We assess and classify offender needs to then provide programs that help decrease offender reentry.

For the last 15 years, the Louisiana Department of Public Safety & Corrections has been working to reduce its incarceration rate, currently highest in the nation per capita. According to a 2009 Pew study, 1 in 26 Louisiana adults are under correctional control, compared to 1 in 31 nationally. In 2013, Louisiana ranked 5th nationally among states in highest violent crime rate, 3rd highest poverty rate, and 4th lowest in percentage of adults with a high school diploma. Louisiana’s incarceration rate ranks No. 1 in the nation per capita, 816 per 100,000 residents compared to 471 nationally, according to the Bureau of Justice Statistics. When only adults (18 and older) are considered, this rate rises to 1072 per 100,000 in Louisiana compared with 612 nationally. As of December 31, 2015, Louisiana’s adult correctional population stood at 36,377, with 72,176 under probation and/or parole supervision.

Roughly 50 percent of the offender population is assigned to state correctional facilities, while the other half is assigned to local-level jails and transitional work programs. Each year, approximately 18,000 offenders release from state prisons and jails to communities across Louisiana. Many face challenges of finding a place to live, finding employment, and accessing services and programs that will assist them in successfully reintegrating into their communities.

Within five years, nearly 43 percent will return to prison, either for violating the conditions of their supervised release or for committing a new crime(s). The five-year recidivism rate for the total DPS&C population, while still high, is an improvement from the five-year recidivism rate in 2008 (48percent), when the Department began focusing on standardizing and expanding reentry programming as well as utilizing evidence-based programs and policies to drive decision-making.

To make significant progress in reducing incarceration and recidivism costs, both in dollars and in negative impact to victims, communities, and families, the Department focused on reaching state offenders on the local level who were traditionally left out of programming opportunities offered at state correctional facilities. The Department, in collaboration with Sheriffs, opened nine Regional Reentry Programs to offer the Department’s Standardized Pre-Release Curriculum 2010 and Certified Treatment and Rehabilitative Programs (CTRP), which allow offenders to learn basic work readiness preparation, money management, substance abuse education and treatment, parenting, anger management, and other life skills prior to discharge. 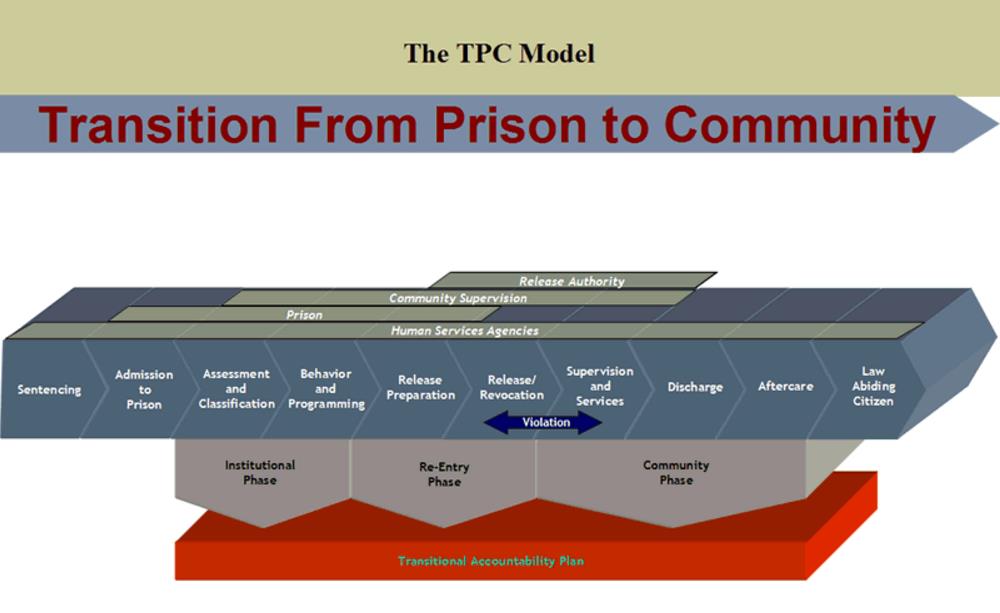 The Department has embraced the Transition from Prison to Community Model recommended as an evidence-based best practice by the National Institute of Corrections. This model establishes a continuum of assessment, classification and case planning, and programs designed to address the “criminogenic risks and needs” of offenders.

“Criminogenic Risks” are those risk factors that research shows increase an offender’s likelihood of recidivating and returning to incarceration. “Criminogenic Needs” are those needs that must be addressed to mitigate this risk of recidivism. While no program, or continuum of programs, can eliminate risk or guarantee a given person will not recidivate, addressing criminogenic risks and needs is considered the best use of resources to increase success for the returning citizen.

There are three phases to the Department’s Reentry philosophy:

Phase I – Getting Ready (Reception and Diagnostic)

The institutional phase describes the details of events and responsibilities occurring during the inmate’s imprisonment from admission until the point of eligibility for parole or release. This phase is designed to encourage and assist offenders in making positive use of their time while in custody by learning skills through education and job training programs, developing new behaviors, addressing deficiencies, and developing pro-social thinking patterns to create a positive future for themselves and their families. 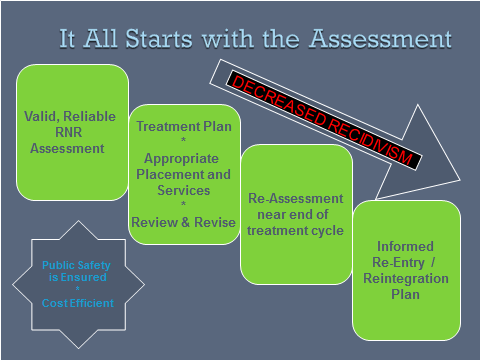 The transitional phase begins before the offender’s target release date. In this phase, highly specific reentry plans are created. Within three years of an offender’s discharge date, the Transition Specialist and Reentry Committee review the ReAP and prepare the offender to complete programs recommended in the ReAP and enter the Department’s Pre-Release Program. Every eligible offender being released from a state prison, Regional Reentry Program, or a local jail pre-release program participates in the Standardized Pre-Release Curriculum 2010, which is a complete reentry program addressing topics such as work readiness and employment preparation, money management, and victim awareness to name a few. A major part of the Department’s reentry curriculum calls for offenders to have identification, social security cards, and birth certificates upon release, all of which increase their chances of being ready for employment right away. During this period, the Transition Specialist begins assembling at least two forms of identification to support the offender’s release. If necessary, a replacement birth certificate and/or Social Security card is requested. When the offender is within six months of release, or as part of completing the DPS&C’s Standardized Pre-Release Curriculum 2010, a Louisiana State Identification Card is created through a MOA with the Louisiana Office of Motor Vehicles utilizing these other forms of identification. Additionally, if eligible, an offender within three years of release may be directed into a Transitional Work Program (TWP) (formerly work release) following completion of the pre-release curriculum.

The community phase begins the moment the offender is released from prison and continues until he/she is discharged from community supervision. In this final phase, it is imperative that offenders receive support in their transition into the community and in remaining productive “returning citizens.” This is accomplished by monitoring their behavior, identifying and referring them to community programs, and developing and growing partnerships with volunteer groups, local law enforcement, faith-based groups, and other community and service providers that can assist the returning citizens in maintaining stability.

Over the last decade, the Department organized and standardized programs and services in state prisons addressing criminogenic needs to better prepare offenders for a successful reintegration into their communities. In 2010, as some local jails began to offer these programs to offenders, the Department instituted the Certified Treatment and Rehabilitative Program certification process to insure the programs implemented in state prisons and local jails were evidence-based and standardized. Offenders are provided the opportunity to participate in a variety of evidence-based programming designed to address the criminogenic risks and needs identified in their ReAP.

Providing standardized, evidence-based programming improves public safety, reduces recidivism, decreases victimization, and reduces the financial burden of the correctional system. To provide an incentive for offenders to take advantage of these programs, a specified amount of credit toward early release is earned by eligible offenders for completing each program up to a maximum of 360 days of credit pursuant to LA R.S. 15:828(B). Successful participation and completion in these programs enable the eligible offender to release to probation/parole supervision earlier and better prepared, also providing a savings to Louisiana taxpayers. The Department maintains a comprehensive listing of all available Certified Treatment and Rehabilitative Programs (CTRP) in a Catalog of Rehabilitative Services.

Approximately 50 percent of state offenders are assigned to local-level (parish) jails. State correctional facilities have historically offered a variety of educational, vocational, and other programming to offenders while those on the local level rarely received such programming. Since state offenders housed in local jails account for approximately 75 percent of releases each year, it was crucial that the Department expand programming at the local level.

Regional Reentry Programs
Over the last six years, the Department has established nine Regional Reentry Programs across the state, with two additional programs to be established by 2016. These regional reentry programs operate in conjunction with local sheriffs and are designed to reach those offenders who are within one year of release or in a Transitional Work Program assignment, and returning to a specific region. This regionalized approach enhances the program’s ability to engage community supports, such as treatment providers, educational opportunities, and family and faith-based programs. Each Regional Reentry Program provides participants with the Standardized Pre-Release Curriculum 2010, two forms of identification, residence and employment plans, and connections to needed post-release resources in the community.

Local Jail Corrections Transition Specialists
In 2014, the Department expanded reentry programs and services in local jails by assigning 20 Corrections Transition Specialists to those local jails housing the largest number state offenders. These specialists conduct risk/needs assessments, provide CTRP instruction in programs such as Thinking for Change, Anger Management, and Parenting, and assist in transitioning offenders to the Regional Reentry Programs appropriate for them. These specialists create a more structured and evidence-based approach to assessing and addressing the needs of the state offender population housed in local jails.

Prison Enterprises (PE), a division of the Department of Public Safety and Corrections, operates a diverse group of industry, agriculture and service programs located at eight correctional facilities throughout Louisiana. Correctional Industries is a unique blend of business and government providing a public service. These industries offer jobs that teach offenders valuable skills, as well as a work ethic and a sense of responsibility; all of which are vital for eventual reentry to society and the security of the institutions. In addition to employing offenders, PE also strives to provide quality products and services to our customers at competitive prices. The trades offenders learn in Prison Enterprises’ operations include, but are not limited to,sewing, carpentry, welding, printing, embroidery, silk screening and farming.

Visit the Prison Enterprises website for more helpful information and a product catalog.

Certain eligible offenders may enter a transitional work program (TWP) from six months to four years prior to release from incarceration, depending on the offense of conviction. Generally, sex offenders are precluded from participation in the transitional work program. Offenders that are approved for the program are required to work at an approved job and when not working they must return to the structured environment of the assigned facility. Probation and Parole Officers are assigned monitoring responsibilities for contract TWP’s. This may include conducting random drug screens and random shakedowns of the facility. Additionally, probation and parole officer are part of the auditing teams that conduct annual audit of TWP facilities. TWP’s are successful in assisting an offender with making the transition from prison back into the work force. Approximately 10 to 20 percent of offenders remain with their employer upon release. The TWP is also utilized as a valuable alternative for technical parole violators, in lieu of returning them to prison.

Benefits of TWPs
Placement of an offender in a TWP is much more cost effective than traditional incarceration. Offenders become taxpayers, not tax consumers and are able to pay victim restitution, child support, court costs, and fines. A long-range reentry objective involves increasing the TWP beds.

The Department was awarded the Justice Reinvestment Initiative – Maximizing State Reforms grant from the Department of Justice in 2014 to create and implement an automated risk, need, and responsivity tool to inform structured decision making and identify criminogenic needs for all criminal justice stake holders. The Department partnered with Louisiana State University School of Sociology to create and validate the tool, which was named the Targeted Interventions Gaining Enhanced Reentry (TIGER).

The Department partnered with the Michigan Council on Crime and Delinquency (MCCD) to engage in strategic planning and revision of the reentry case planning continuum known as the Louisiana Prisoner Reentry Initiative. MCCD has worked with several states to improve objective assessment and decision making, as well as case planning and systems integration. An Implementation Steering Team (IST) involving staff from all disciplines and sections of the Department was brought together to work on the creation of a System Blueprint and Logic Model, as well as a Strategic Planning Framework for Prisoner Reentry. The outcome of the work on the LA-PRI is a unified Reentry Accountability Plan (ReAP) which guides the offender and Departmental staff, and also other stakeholders such as courts, the Parole Board, local jails, and community resource providers. This case plan improves pre- and post- release programming and intervention planning, as well as better informs structured decisions of the courts and Parole Board. The LA-PRI IST continues to meet on a quarterly basis to work on the ReAP and insure that it not only fully utilizes the TIGER, but informs the development and automation of the TIGER.