Find what you’re looking for, from annual reports to training and volunteering information.

All requests should be submitted in writing to:

Or you may email your public records request to the Deputy Secretary at docpublicrecords@la.gov.

Offender records are not public except for the limited exceptions given in LSA-R.S. 15:574.12. The only exceptions are records reflecting an offender’s age, offense, date of conviction, length of sentence, and misconduct while incarcerated.

It is the secretary’s policy to maintain positive, informative relationships with the public, the media and other agencies, consistent with the security and privacy interests of the Department, its staff, and people in prison or under community supervision.

Media are divided into two groups for the purposes of gaining access to correctional facilities and/or probation and parole district offices.

All visitors, including credentialed media and commercial production crews, will be provided an escort while on the grounds of a correctional facility for the duration of the visit and entities must sign release forms/location agreements prior to story gathering/commercial production.

In general, the Department will consider interview requests related to rehabilitation and similar programming that people in prison are involved in (education, vocations, clubs, rodeo, etc.). People in prison are not allowed to conduct interviews where they discuss the crimes of which they have been convicted. Consideration of the feelings of any victims and/or family members of victims outweigh all other issues. Access to imprisoned people can be restricted or disallowed to prevent them from profiting from their crimes, either materially or through enhanced status as a result of media coverage.

Questions about medical billing for care provided to people in prison?

Healthcare providers inquiring about medical billing and claim status regarding an imprisoned person should contact CorrectCare Integrated Health at 877-292-7999.

CCIH provides a portal for medical providers to make inquiries and status claims. Register today through the CCIH website to inquire about your medical billing questions.

The document below lists professional, personal, consulting, and social services contracts, interagency agreements, including community service work crews, and leases. These contracts are entered into in accordance with procedures established by the Office of Contractual Review and the Real Estate Leasing Division of the Office of Facility Planning and applicable statutory requirements. For any questions concerning these contracts please contact Tammy Grant at (225) 342-6578.

The purchasing function of supplies, equipment and services in fully handled by the Division of Administration, Office of State Procurement (OSP).

Additional purchasing information can be accessed at http://www.doa.la.gov/Pages/osp/Index.aspx.

All purchasing inquiries should be directed to OSP at:
Phone: (225) 342-8010
Purchasing: DOA-OSPhelpdesk@la.gov
Vendor Inquiries: Vendr_inq@la.gov

We Need Your Help - Volunteers/Contractors

Corrections alone cannot succeed in the reintegration process. Community stakeholders need to be involved and made aware of the difficulty returning residents face once released. Many people are not aware that most of those that are incarcerated today are eventually returning to communities. When an imprisoned person returns to the community, he/she may face the negative stigma of incarceration. This stigma may cause returning residents feel uncertain, sometimes fearful as they return home.

While the Department clearly has a primary role in managing the reentry of returning residents, the process cannot be carried out successfully without the involvement of other state agencies, community organizations, faith-based groups, crime victims, and the friends and families of returning residents. Therefore, creating and strengthening community partnerships is a central piece of the process. Volunteers are an extremely vital part of the returning resident’s transition back to his or her community.

Community volunteers are needed for a variety of services including mentoring, transportation, job search and employment, and family reunification. For additional reentry information, volunteer inquiries, or to provide community transition services, including employment opportunities for people releasing from prison, please direct calls to the Office of Offender Reentry, (225) 342-0206, 1(888) 332-2673, or email rhett.covington@la.gov. For information about volunteer training and approval, please follow the steps below. If you have additional questions or concerns, please contact Diana McCool at diana.mccool@la.gov.

To apply for a volunteer position, please complete the following steps:

A background check will be completed on each volunteer annually. Applications do not guarantee approval. 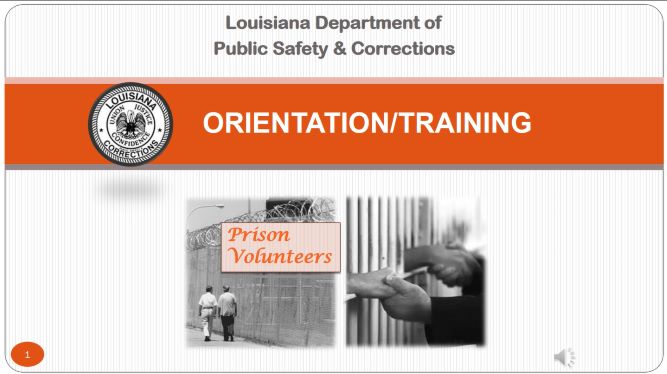 The following orientation module video is designed to inform authorized legal representatives of an imprisoned person’s counsel of protocol and procedures governing their visits to imprisoned people housed in state correctional facilities and is required to be completed prior to an approved visit.

It is the responsibility of legal counsel representatives to review in detail the following module and to complete and print the certificate of completion for their records.

Any questions regarding the content or meaning of content in this module or its associated policies should be directed to the warden or the warden’s designee of the facility to be visited.

The visitor is responsible for providing an approved form of picture identification, the completion certificate, and any other required credentials at the time of entry to any state prison facility, or in advance to that facility, as may be applicable.

This course must be taken annually. The certificate of completion is good only for the year the course was taken, and for the year it was created. 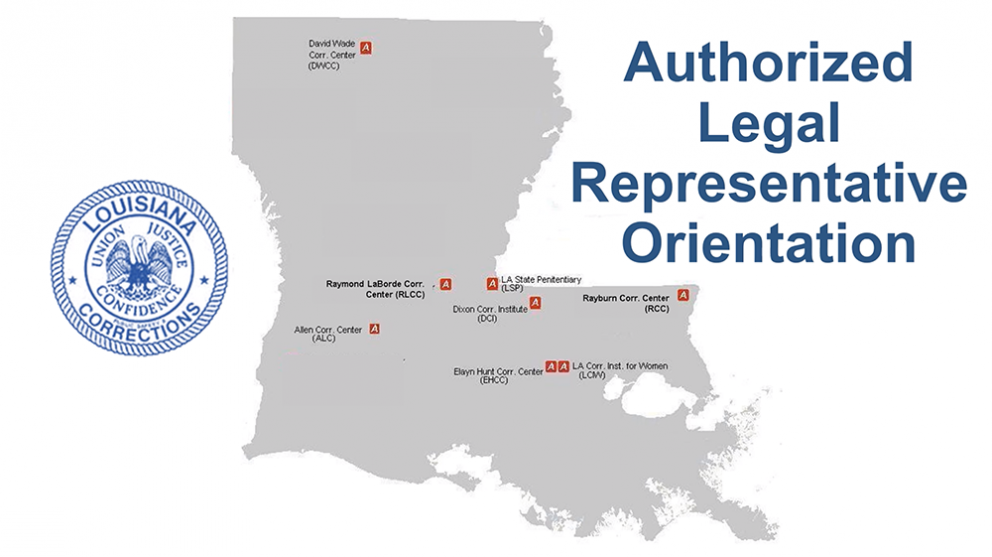 Certificates of completion will be issued to you within seven business days following the date you submit your properly-completed request for certificate form.

All requests for certificate forms must contain a hand-written signature. No computer generated signatures will be accepted.

The Louisiana Department of Public Safety & Corrections has a zero tolerance policy regarding sexual violence and sexual misconduct involving staff.

Tap a card to view our brochures

Year of the Peer Podcast Feature

Secretary James M. Le Blanc and Deputy Assistant Secretary Perry Stagg were featured on the Year of the Peer podcast.

Who you surround yourself with matters and in today’s world, this has never been more relevant. Each week, author and keynote speaker Leo Bottary interviews thought leaders from all walks of life who share how they leverage peer advantage. 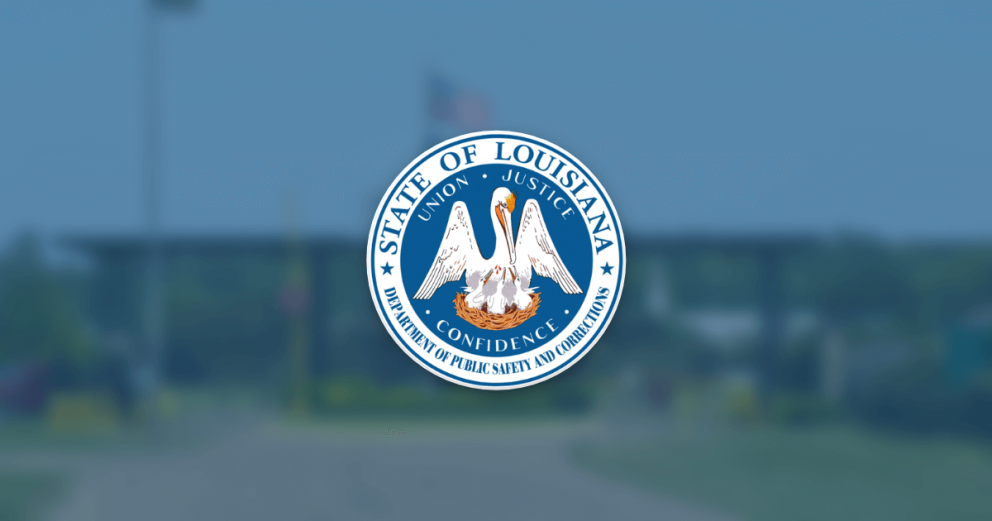 Early reporting and intervention have proven to be the most effective method of resolving actual or perceived incidents of harassment. Therefore, the Department requires the prompt reporting of complaints or concerns, so rapid and constructive action can be taken. To that end, any employee who wishes to file a complaint of alleged sexual harassment may click on the link below to for information on filing a complaint.

The rule-making activity above is for the Division of Administration only.